Why Cats Go Crazy For Catnip

Why Cats Go Crazy For Catnip

Most cats get playful from time to time, but a cat on catnip shows a different level of intense energy. If you've ever found a feline to be rolling around, drooling or pawing at invisible objects, the cause of his unusual behavior is probably catnip.

Catnip, also called Nepeta cataria, is a species of herb belonging to the mint family. About 50 percent of cats can be affected by the herb, either by smelling or eating it. When a cat smells catnip, your furry friend will be unusually energetic and giddy for about 10 to 20 minutes. While smelling catnip gives cats energy, however, eating the plant has a different effect and instead causes cats to become calm and lazy-like. Researchers aren't sure exactly how to explain the reaction cats have to the plant, but they believe the herb triggers receptors in the brain that cause euphoria or a mellow mood. 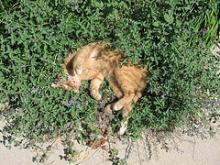 Although the side effects are unusual, catnip is not thought to be harmful to the animal. The herb can actually prove useful when training cats to use scratching posts or certain furniture. If you want to prevent your new cat from clawing your sofa or table, simply tie a catnip toy to your scratching post to attract the cat and get her interested in the scratching post.  We treat all of our cat scratching posts with organic liquid cat nip to encourage scratching and use.